Happy New Year friends!  January is going to be a busy time on my blog so get set for a flurry (relatively speaking) of posts! We begin with the “fourth quarter” recap of the 2018 Fruit and Veggie Art Challenge, letters T thru Z.  There will also be a final year end recap but I wanted to give some thoughts on the last batch of letters and illustrations before contemplating the year as a whole.

First a look at the 7 fruit/veg I created for the final quarter of the alphabet:

Overall I quite like this group.  Despite the fact that there were less options for many of these letters I was able to find something interesting to illustrate for each.  It is actually quite difficult to pick a favorite.  I will call it a tie between the Turnip and the Ulluco. 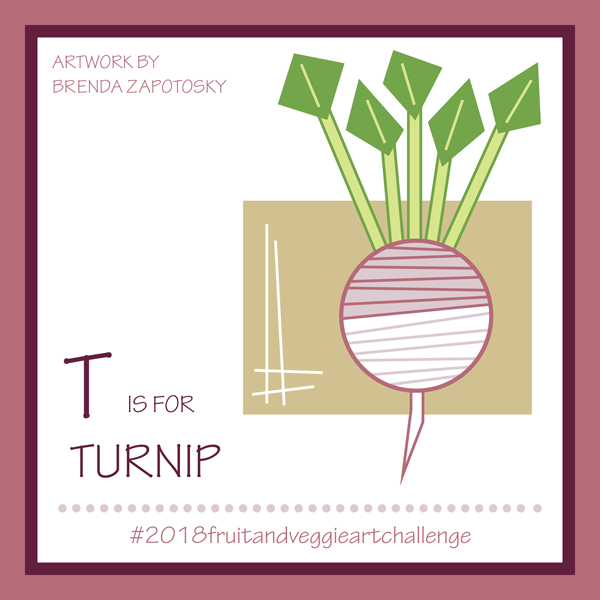 Interestingly, I was hesitant to choose turnip since I drew radishes for R and I thought they might be too similar.  But it was an enjoyable challenge to determine the differences and make the turnip its own unique thing.  Here is a side by side view.  (PS: The identical frame colors was not planned!)

The letter U was one of the more challenging one in terms of choices, making my love for the finished illustration all the more sweeter!

I love the look of the vegetables; the colors used for them, the background and frame; and just the overall composition.  It is too bad this would probably not be very marketable as a pattern, etc.

Choosing a favorite is difficult but choosing a LEAST favorite is not!  Yam is the “winner” of that unfortunate prize.  To be honest, I think my geometric rendition is fairly good in terms of representation… I just don’t like it!  It sort of looks like a hairy rectangle to me!!!!  In real life they are sort of “hairy” so again… rather accurate. You will NOT be seeing a Yam pattern in my Spoonflower Shop!  Ha ha ha

However, you probably WILL be seeing a Watermelon one!  I see the most potential with this one either alone or incorporated in a more elaborate print.  Perhaps something picnic themed.  I have nothing in the works yet… maybe closer to summertime.

That about wraps it up!  Overall I would say it was a strong finish to the year long challenge!  Up next will be the entire year recap.  In the meantime, in case you missed it, the 2019 Alphabet Art Challenge has officially begun.  The theme is CITY and you can read all about it HERE.

I hope you enjoyed this in-depth look at the final set.  Do you have a favorite?  I would LOVE to know which!

One thought on “Fruit and Veggie Art Challenge: T-Z”