The final group of letters for the Alphabet Animal Art Challenge is complete!  It is so exciting to be finished!  I considered combining the last quarter letter’s recap with an overall end of the challenge post, but for consistency purposes (and blog post length) I have decided to keep them separate.  So look for a final recap on the entire challenge coming (hopefully) later this week!

There were 7 animals in this final group.  Here is a look at all of them:

This was not my favorite batch, and included some of the most challenging animals from the entire year.  Even though I initially planned on avoiding fish (since I have drawn MANY in the past), for the letter X it ended up being my favorite choice, and it is definitely one of my favorite from this batch. 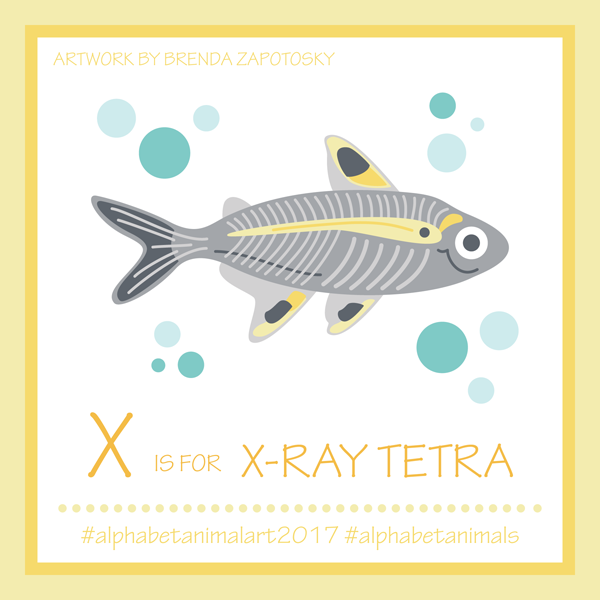 I also really like how the Urial turned out! It is too bad it is a more obscure animal, not sure if/how I could really use him in the future. 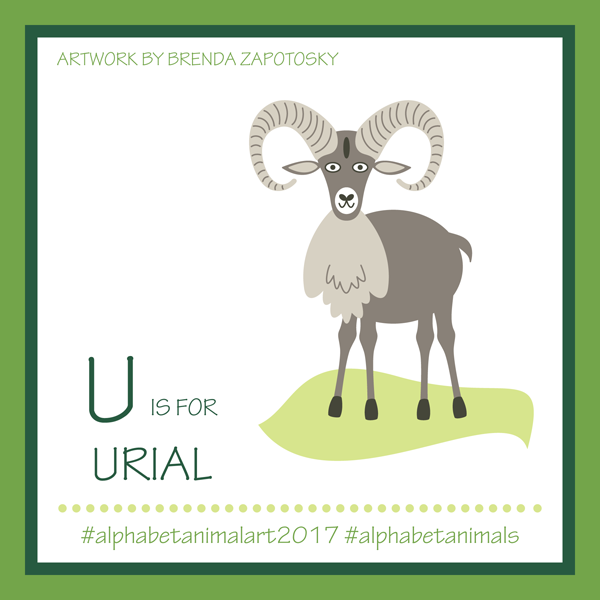 I think another reason this round was more difficult, especially at the end, was the lack of time due to all the extra Christmas prep and activities etc. that I was doing.  More complex animals to draw (like the Yak and Zebra) combined with a time crunch equals less fun in my book.  One of the goals of this challenge was to force myself to be regularly creating new art, and it DEFINITELY did that.

During this last quarter I also created one new greeting card design using an animal from the previous batch, the raccoon:

I switched up his colors, added mittens, and placed him on some snow to give him a Christmas make-over!  (You can see the original version of the raccoon here.) This was a SUPER quick card design squeezed in to give to my husband for Christmas.  In the future, if I wanted to use the card again, I’d like to spend a bit more time on it, and use my own original font.  I am also considering a Christmas surface pattern featuring this guy and maybe a few other woodland animals.

That’s it for this round!  I have a ton of thoughts about the challenge overall which I will share in the final recap!  In the meantime, I’d love to hear which animal was YOUR favorite this round!

ps.  In case you missed it, I announced the theme for the 2018 Alphabet Art Challenge a few posts back!  Super excited for a new year and a new topic!  I would love for you to join me!

Keeping with the cool tones palette AND getting into the Valentine's Day groove with this fun Teal version of my Nested Hearts design. I actually have a fat quarter of this printed on Cotton Spandex in my stash. I bought it for my niece who shared she wanted something in aqua hearts a while ago... I did not create this special... I think it is pretty cool that I already had a print fitting that description! I probably won't make anything with it until her birthday (June) which gives me plenty of time to think about WHAT I should make.. Any suggestions? I will have to combine it with a solid if I make a clothing item... hmm. #spoonflower #fabric #wallpaper
My first Mix and Match Monday post of 2023! I went with COOL WINTER as my theme! (Even though some of these patterns are technically from summer themed collections! ha ha!) These patterns are almost all from different collections and while I am not sure one would use all of them for one project I think there are a lot of fun combos to be found here. And I do love how they look all together in this collage! I really enjoy putting together these Mix and Match looks but they take a lot of time... I think I am going to aim to be more consistent with posting them... as a once a month feature which seems doable! :) All patterns can be found in my @spoonflower shop... leave a comment if you need a pattern name! #spoonflower #wallpaper #fabric
I thought I would share another Valentine's design today... And we have some wack-a-doodle weather going on here in NE Ohio... so I felt like these heart snowflakes matched the mood a little? We had snow this morning... like a lot of snow... few inches in a few hours... now we have rain! I think it could wipe out most of the snow by the time it is done... and then. MORE SNOW starting late tonight! I am not really a fan of this snow/rain/snow situation... I get nervous about ice on branches.. But I am a fan of this design. And in this SUGAR colorway with its shades of teal blue accents on the snowflakes it is almost like rainy snow! Kind of sort of maybe? As usual you can find it in my Spoonflower shop! #spoonflower #fabric #wallpaper
I know we are pastr Christmas and most people probably aren't shopping Christmas fabrics at the moment... BUT! I listed a NEW design in my Spoonflower shop today. A design I created for a Christmas present I made and I wanted to share some photos too! You may recall that I used my Gingerbread Wonderland print to make a Christmas "stocking" bag... I used the leftovers of that print to make a quilted table mat! I paired it with two other prints from my Classic Christmas Collection, a diagonal stripe for the binding and a new version of my sparkles design! I love this combo of prints together but I will admit that the stripe for the binding posed some challenges (and then I made some bad decisions)... but I am happy with how it end up looking so WIN!!! Swipe for more views including a design look at the patterns! #spoonflower #spoonflowered
Hi there! I have been a little MIA on IG this week! HA! Been very productive in LIFE... very unproductive in design etc. Just a combo of things I suppose but I each afternoon as I sat at my desk this week, I just could not be motivated to really get stuff done. I was not completely unproductive but I do feel like I squandered most of my time. Ever have one of those weeks? Couldn't really think of a design to express that mood... but maybe these heart clouds fit? Sort of Valentine's adjacent? I DID work on a new valentine's card the second new card for this year! I am pretty excited about both of those! :) #spoonflower #fabric #wallpaper
Another hearts design for #monochromaticmonday This one comes in lots of colorful versions too! #spoonflower #fabric #wallpaper